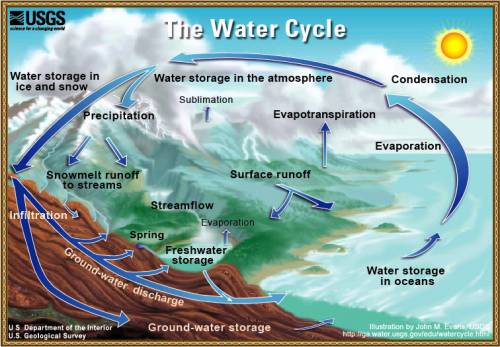 The Water Cycle describes how water in the Earth's ecosystem is in continual motion, moving from place to place and taking different forms. Water may be solid ice, liquid water, or gaseous vapor.
The water cycle acts like a huge storage tank and cleaning machine that provides the world with fresh water required by living things, like plants, animals, and humans. Unfortunately, there are leaks in the system and sometimes the water gets contaminated.

Since most of the water is in the oceans, let's start there.   Oceans cover about 70% of the surface of the earth.   Ocean water is saltwater, or 'saline'.   Water is considered saline if it has at least 1000 parts per million (ppm) of dissolved salts.   Ocean water contains about 35,000ppm of salt, so it's WAAAAY saline!   The oceans are like a huge bucket, holding water until it is needed.   The sun beats down on the oceans 24 hours a day and that causes water to evaporate into the atmosphere.

A cool thing about evaporation is that the evaporated water is no longer saline, it's pure and clean, leaving behind the salt and any contaminants. This is where the cleaning of the water occurs. During evaporation, water is purified, which is good. But, it also loses important dissolved minerals, which is bad.
About 90% of the moisture in the atmosphere comes from evaporation of oceans, lakes, and rivers. The other 10% is from plants transpiring, releasing water from their leaves. A tiny bit of atmospheric moisture results from sublimation, when snow turns directly into vapor. But, however it gets there, some of the earth's water is always stored in the atmosphere.

There are about 3100 cubic miles of water in the atmosphere. Sounds like a lot, but its a tiny fraction of all the water in the system. The atmosphere is more like the delivery truck in the water cycle rather than a storage area. The water is moved quickly around the world by high winds and delivered to exotic locations like Paris or Poughkeepsie.
We can't see water vapor in the sky. On a beautiful blue-sky day, there are still many tons of water vapor in the sky over you, but you can't see it. When water condenses back into a liquid form, clouds are created and we can see the water. Clouds are made of zillions of little water droplets that are kept aloft by the heavier air underneath the cloud.

When too much condensed water is in the air, it glumps together and then falls as precipitation. About 90% of precipitation falls right back into the ocean before winds can carry it over land. But, the rest falls on picnics, baseball games, and ripe wheat fields.
Condensation is where some of our problems occur. Smoke and exhaust combine with water vapor and can cause acid rain. This acid rain can slowly dissolve car paint, buildings, rocks, anything it lands on. It also can damage or kill plantlife. Restricting smoke emissions is an ongoing fight to reduce this problem, but there will always be some impurities mixed in with rain when it falls.

Depending on where the water falls, it may continue traveling or enter another storage bin. The ice caps and glaciers store water for a short time or thousands of years. This is refered to as 'fresh' water because it is not saline, not because it is fresh and safe to drink.
There are about 8.4 million cubic miles of freshwater on the earth - that is about 2.5% of the global water supply. Of that, 68% is stored in ice caps and glaciers so that leaves only about 2.6 million cubic miles of available fresh water traveling through the system. That is less than 1% of all the water.

The fresh water we have available to us exists in rivers or lakes or in groundwater. When water falls on land, it either runs off into streams or seeps into the ground. When water seeps into the ground or infiltrates the ground, it is filtered and cleaned. This allows us to drill wells and pump water directly from deep in the ground into a glass to drink. Water that is on the surface of the ground is susceptible to all sorts of contamination, no matter where on earth it is.
Water on snowfields can have a reddish tint from bacteria growing in it. Water in a river can have sewage and chemicals in it. Water in a high mountain stream may have viruses or bacteria from wild animal waste. Since this is the water we have available to us when camping or during emergency situations, being ready to make it safe to drink is very important.

Read more about common water contaminants, how to find water in the wild, or ways to make water pure.